Face painting, group shouting, collecting feathers for good energy, Native American Indian jumping, archery, and last but not least: inaugurate children to our tribe. The volunteers of the Malteser Youth of Budapest held a summer camp between 24 and 28 July for the children with difficult backgrounds, coming from Ócsa and the Temporary Shelter of Families in Budapest.

Getting to know each other, group building games, playing on the shore of the Danube, hiking trip in the surrounding hills, creative talent show, eating ice cream in Párkány, sightseeing in Esztergom, visiting the castle of Visegrád, number war, arts and crafts – all of this within five days. 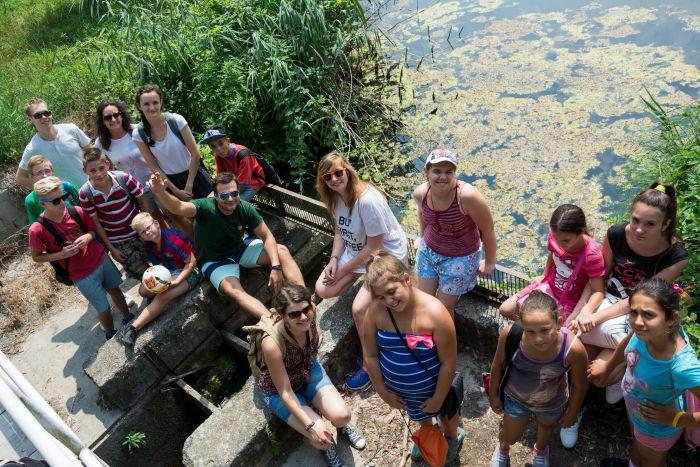 We considered last year’s summer camp as the first step of our long-term program at Ócsa. This is when the founding group of Malteser Youth in Hungary got together: the youngsters organised a 5-day-long camp for the children coming from the village of Ócsa. For this reason also, it was obvious that we would organise the camp the second time as well. Last year the topic of the camp was about chivalry, this year we decided to plan the activities in the frames of Native American Indians.

The children were selected based on last year’s program: their involvement, participation, cooperation and motivation. Children from the Temporary Shelter for Families joined the Ócsa children. 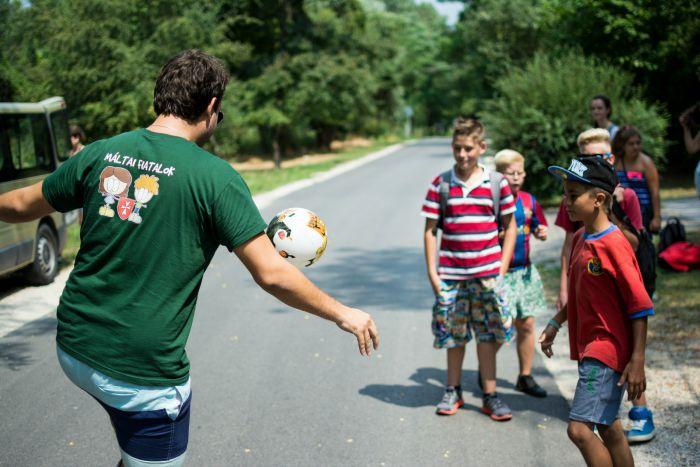 Children arrived to Esztergom on Friday, where our volunteers were already waiting to welcome them. After everyone packed down the luggage in the rooms, we have opened the camp in the garden of Szent Adalbert Centre, where our accommodation was. Following the introduction, we walked to the island nearby, where we started the activities with warming up and introduction games. 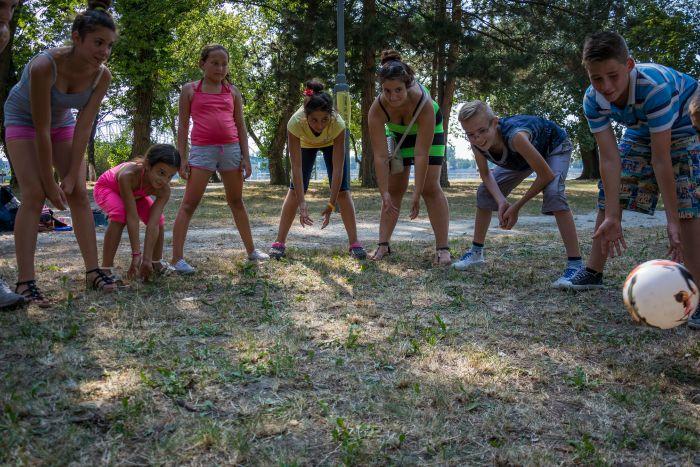 Then we have spent some time on the shores of the Danube: in the heat wave, the children enjoyed going into the water a lot, splashing some water on each other, and throwing some stones in the river. Even spontaneous treasure hunting took place: the girls collected shells and the houses of snails, and everyone had to find a stone for themselves, in order to create a totem later on.

After the supper, we had the evaluation circles in two smaller groups, where we could discuss what happened during the day. A movie screening followed the feedback round: we watched the film entitled Kings of Summer. The story revolves around three boys, who escape to the woods and build their own cottage, where they could take distance from their problems at home.

On Saturday, we went for a hiking trip to the surrounding hills. After some orientation problems in the beginning, we wound the right way, left the ponds and the civilisation behind, and we reached the woods, where in the shadow of the trees, the warm weather was easier to bear. In our fight against the weather, the lunch break next to a spring helped as well: the children were splashing water from bottles to each other. After the trip finished, we started preparing for the event in the evening. 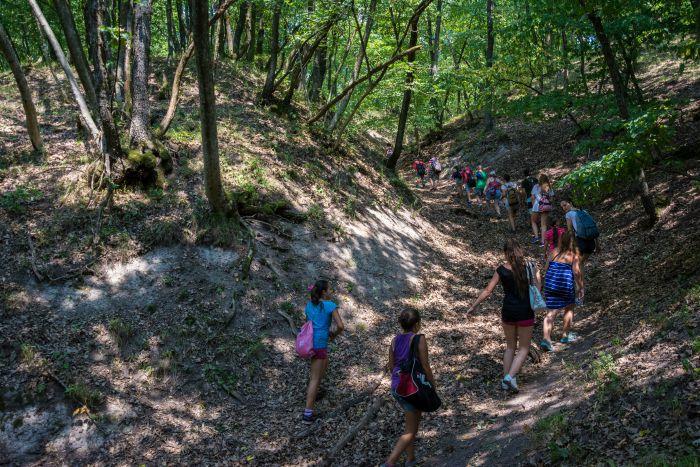 Already in the beginning of the day, we divided the children into 3 groups. All the groups had a leader from the volunteers, with whose help they could prepare a show for the evening. The groups had the genres of rap, folk tale and reality show. They also had to include several given words in their story. Our volunteers also accepted the challenge: their task was to transform a class reunion into a horror story.

During the next two days, the children could get to places where they have never been before. On Sunday, our first road brought us to Slovakia. We walked to the city of Párkány on the bridge, connecting the two cities. We had some time for walking and eating ice creams. For most of the kids, it was their first time being abroad. “How do you feel?” – we asked them. “It is the same as at home, just we don’t understand what people are saying” – they answered. Regardless, they were trying their best: they were taking care when exactly they cross the border, going through the bridge, and greeted people coming along the road, in Hungarian – hoping that someone would answer. 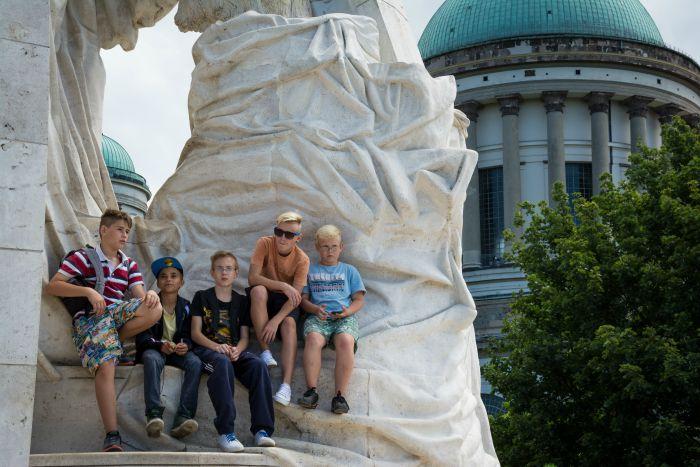 After checking out Esztergom from the other part of the Danube, we returned to Hungary, and headed towards the cathedral. Inside the church one of our volunteers, who is studying to be an art historian, told the children about the building, the interesting facts and the historical background. For some of the kids, the moment was even more special, as it was the first time that they had ever been to a church. 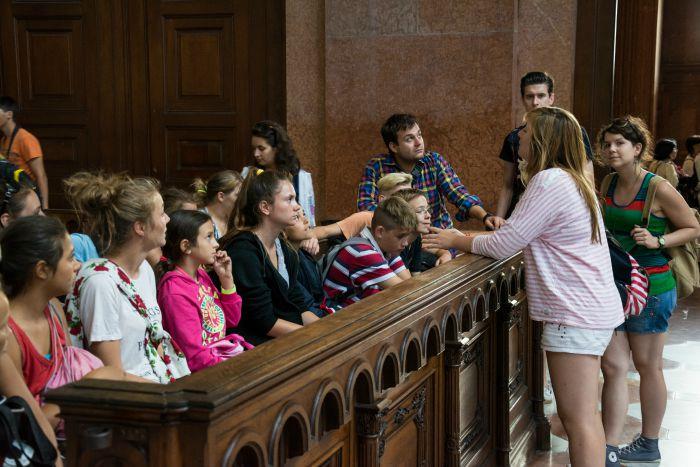 On Monday, we brought the group to the castle of Visegrád. Walking in between the walls, they could hear interesting stories about the fights that happened there. With the wax figures exhibited in the castle, they could imagine how life could have been in the castle back in the past. 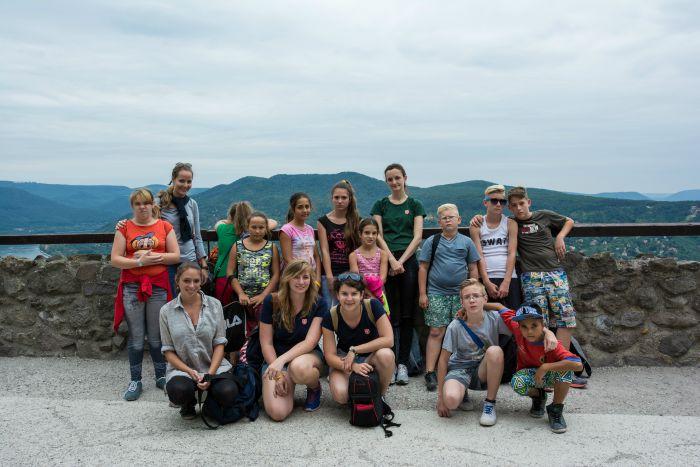 And where were the Native American Indians during all these programs? Sometimes they appeared on the most obvious places, other times at the most surprising places. During the games on Sunday afternoon they could leave the first station with some paints on their face and a self-designed balloon in their hands. They had to travel in between the stations with Native American Indian jumping, and also, the archery was included. 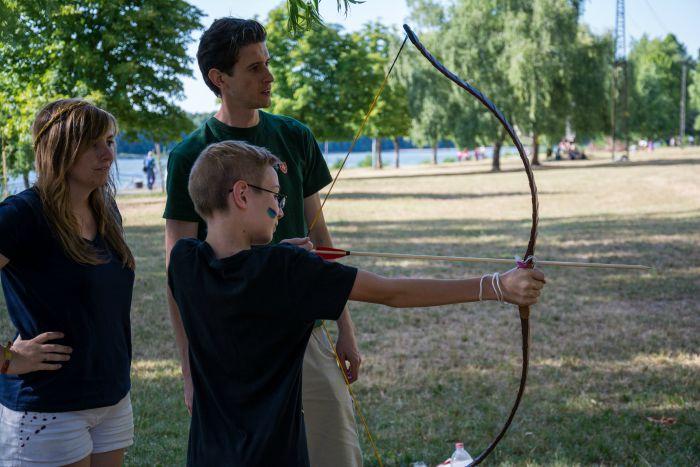 On Monday there was a game called “number war”, where the two “enemy tribes” could fight for the flags. The last day’s game the groups had to trade with special Native American Indian goods, such as leather, buffalo, tents and gold. 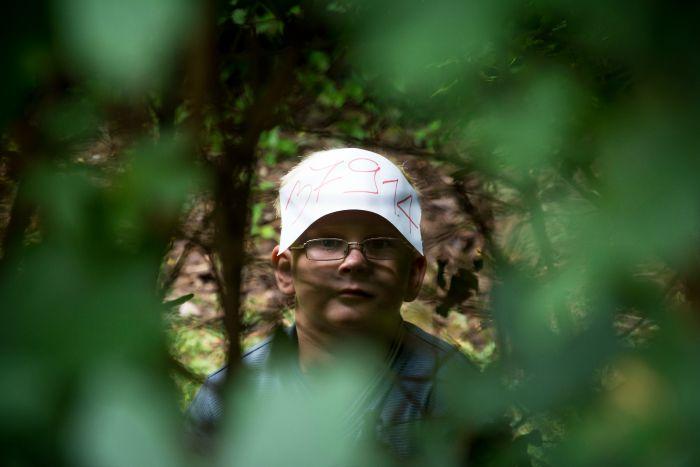 We organised a handicraft program for the evening, where face painting and Native American Indian hair was designed for the girls and boys. During that all the kids could create their totems from the stones they had collected during the first day. Also, some of them were really creative, and made dream catchers, necklaces or bracelets. 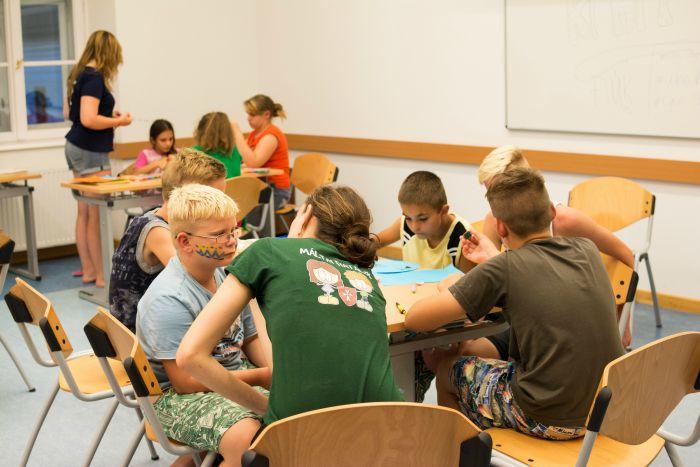 The daily feedback was also organised in Native American Indian style. After the dinner, we sat down in a big circle. First, the volunteers could give colourful feathers to the children, who deserved the compliments that day (they helped each other, or had done something good to the other person). In the next round, the children could give the presents to someone else among themselves, explaining why they are giving it to a certain person. For the last day, from all these colourful feathers, smaller or bigger collections were made. 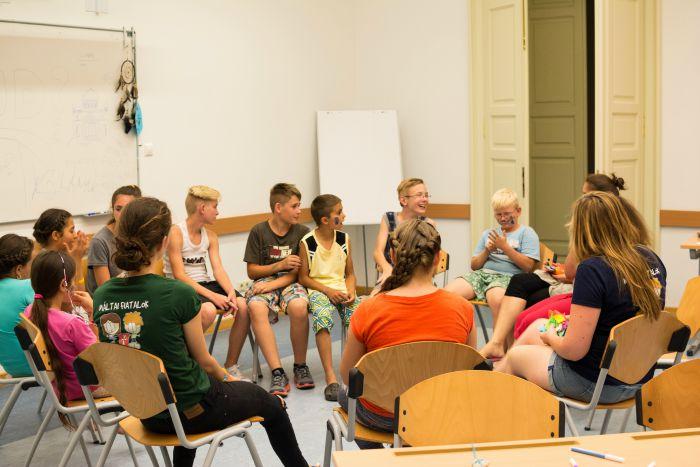 We organised the closing ceremony for Tuesday, before the lunch. All the children got a personal evaluation, some small presents and we shared our reflections on the camp, gave some positive feedback, and greeted them as the members of our tribe. With the handing out the “certificates”, we officially finished the summer camp of this year. 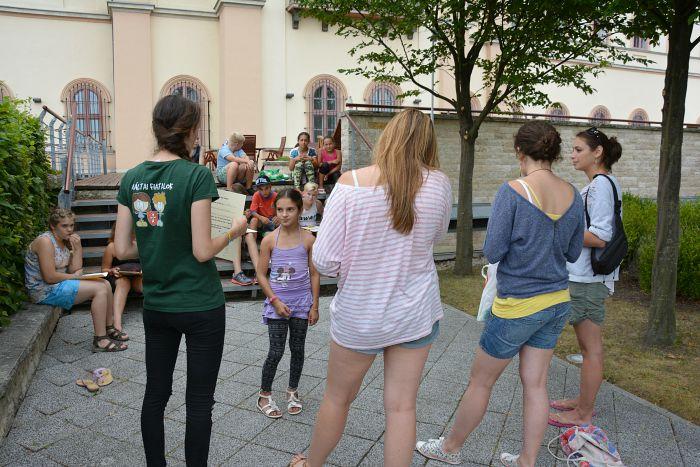